Achieving 2,000kg of milk solids per ha with a low-cost system in Laois

The Duggans run a streamlined, low-cost, spring-calving operation on the undulating slopes of south-east Laois.

Eamonn Duggan has been farming full-time here since he was 16 and has witnessed some dramatic changes to the farm over the years.

Eamonn is very focused on his low-cost system, where he grows lots of grass and has a fertile, high-solids cow to enable maximum returns.

The herd boasts an 88% six-week calving rate and 476kg of milk solids sold; when you remove culled cows that are often carried over to June, the figure is 500kg.

The farm is now made up of two main enterprises, the first being the milking cows. The herd will consist of 144 cows and heifers this year – up from the 70 or so cows that would have been milked here in the mid-2000s.

The second is an in-calf heifer enterprise with 60 heifers being sold at 19-20 months.

The farm is made up of three blocks of land:

Cows calve and go out to grass thereafter, whatever the conditions. Luckily, the Duggans are blessed with a very dry farm; calving starts on February 1 (this year 132 cows and heifers had calved by March 19, with just 12 left to calve).

Eamonn has a basic yard with no cubicles with the ‘Home Farm’ yard made up primarily of a straw-bed shed and two topless rubber-matted slatted tanks; these also double as the collecting yard.

Last year was a very difficult year for Eamonn with both the snow and drought. 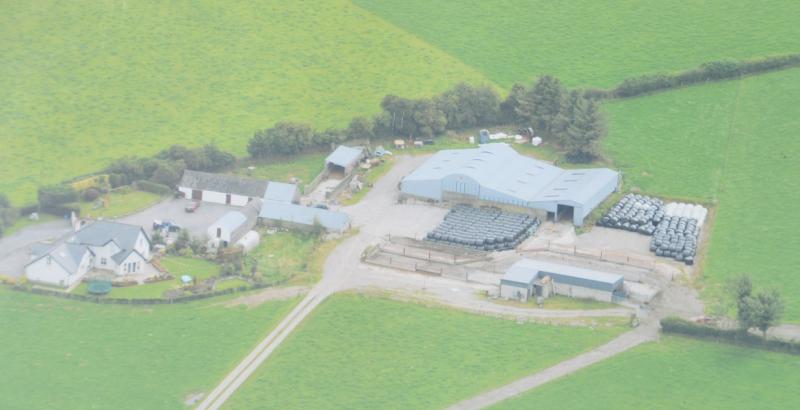 “We have dry ground here in general. During the day time, we go to wetter paddocks for the shorter grazing interval; as soon as cows calve they go out,” Eamonn explained.

Eamonn is a member of the Acorn Group based primarily in south Laois with a few outliners. The group was first started in 1998 and is facilitated by Teagasc’s Fintan Monahan.

Eamonn was also in a Glanbia/Teagasc Joint Monitor Farm Programme which started in 2011, facilitated by Richard O’Brien, and remains part of the core group today, with phase I and II in a discussion group together.

“I have been measuring grass for 10 years or more. For me, it is a great thing; it is logical. Once you start you can’t stop,” the Laois-based farmer explained.

Some may question Eamonn on not milking cows on, but to do this Eamonn “would need facilities for those 20 or 30 days.

For ease of management all cows are freeze branded which makes milk recording and day-to-day handling much easier. Eamonn puts it simply: “I like to know my cows and freeze branding reduces mistakes.”

A simple bracelet system is also in place with yellow for slow cows, green for high-SCC cows, red for blind front quarter and blue for blind back quarter.

Eamonn’s 2018 co-op report places him in the top 15% of Glanbia suppliers for kilograms of milk solids sold at 476kg. As mentioned above, when you remove culled cows, the figure is 500kg.

This is exceptional, particularly in a low-cost system, with the target being to keep costs of production below 20c/L (profit monitor figure).

Key figures that Eamonn focuses on:

For Eamonn, the co-op report is a useful tool. He said: “I could do things to manipulate the report, but I don’t. The report is there for my benefit.

“In our discussion group, we all send in our litres and solids percentages two days before we meet and Fintan shows us all what we’re getting per litre, per cow and profit per day.

“It really allows you to see how you and your cows are performing. Often, lower-litre cows are outperforming those with higher litres.”

Commenting on his ideal cow, he said: “A 550kg black and white cow doing 550kg of milk solids would be the ideal cow.

The herd’s average EBI at the moment is €135. With the milking platform stocked at 4.0LU/ha – and the whole farm stocked at 2.4LU/ha – performance is important. 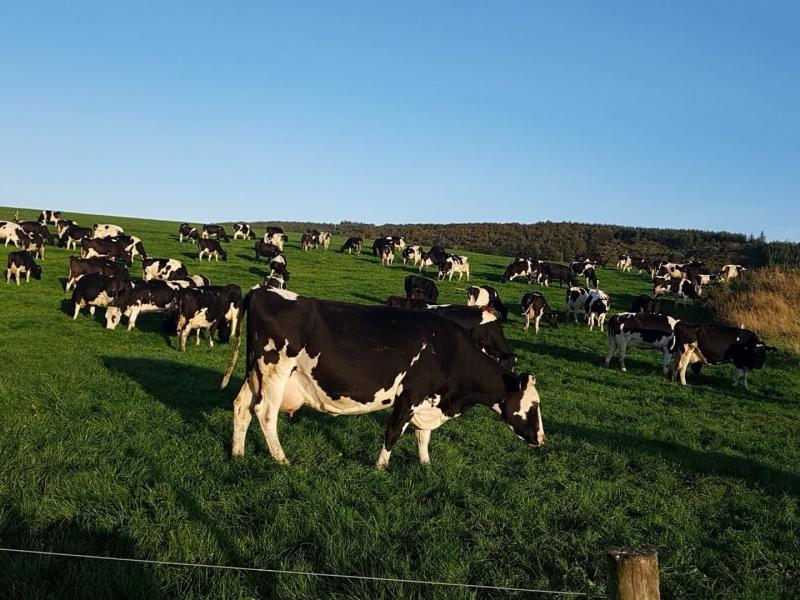 “These cows have been bred from the best genetics for a long time. I’d be hoping to get to 520kg of milk solids/cow this year.”

The target intake would be 16kg/day of grass and 3kg/day of meal. The main limiting factor for Eamonn is days in milk, milking from February 1 to the end of November is 302 days.

“With the average lactation of 270-280 days, it’s a short enough season. But this is my system. I take two months out of the milking parlour regardless.”

7% of the cows were empty after breeding last year, with others culled for various reasons; culled cows tend to be carried on the rough grazing in ‘Johnstown’ until June or so.

The criteria for sire selection would be in line (usually above) the Teagasc guidelines that Eamonn gets off Richard O’Brien (pictured below), with a little extra focus on fertility, as it is such a key part of Eamonn’s system, with good percentages and no more than 250kg of milk. 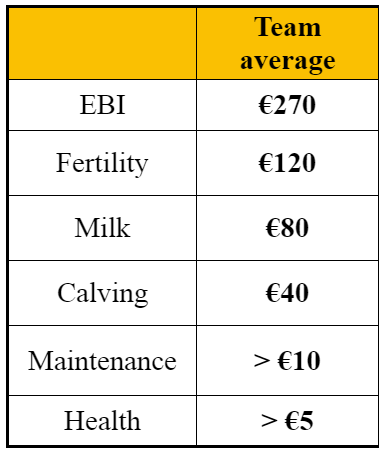 Progressive Genetics has the top five bulls on the Active List (ICBF, March 2019); see those sires and more by clicking here.

Eamonn has been using Progressive Genetics AI Service since the mid-1990s – Albert Bailey is his AI technician.

Almost all cows and heifers in the herd are February or March born, with just two April-born cows and a handful of January-born cows.

There is a very small amount of crossbreeding, with Jersey sires accounting for 4-5% of AI usage. Triplestar (JE4289) and Superstition (JE4497) were used on the ‘giant cows’ last season.

Cross-breeding on the whole hasn’t been something Eamonn, or his fellow discussion group members, considered as necessary for him. 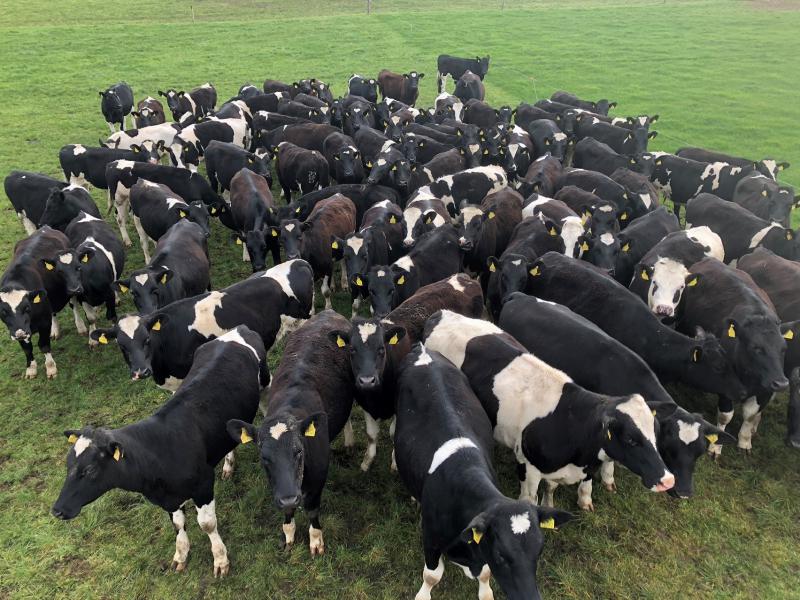 “I have a fairly steady black and white cow, with decent percentages, going back in-calf with fairly good fertility; plus, I’ve no lameness. I’ve a no problem type of cow.”

Last year, 25% of the semen used on farm was fresh semen. This would probably have been higher, but Eamonn was involved in the sexed semen trial; the year before fresh accounted for 45%.

The team is made up of Eamonn and his wife Marguerit and his sons Will, Ned, and Geoff and daughter Isabell. Allen Ryan is also a key cog in the wheel for nearly 10 years fulfilling a general-operative role.

Eamonn also uses the FRS Service for both labour and for other services such as freeze branding (in general heifers are freeze branded in October or November).

Adam Whyte also helps out at the weekends. Eamonn describes Adam as “a very good neighbour and a brilliant chap. He has been in and out for a number of years. You just can’t beat having a good team.”

Bigger jobs are outsourced. 80% of slurry is spread by a contractor and all silage work is contracted; plus approximately 40% of the fertiliser.

“Any building or anything like that I’ll get it done professionally. If there is a yard to be done, I am not going to start mixing concrete. When building, hire the experts. Get them in, get them out and have it done right,” he explained.

Historically, the farm would have been a mixed enterprise, but it is now a specialist dairy farm. What really was the turning point for Eamonn was a year spent in New Zealand.

“I came home and let the cows out and that’s how we are where we are now. I’ve learned a lot in the mean time.”

Eamonn completed a specialised dairy course in the late 1990s when quotas were a huge issue, with the first change coming really in the late 2000s when you could bid without having to take on land.

“The land was a killer before that opened up things,” Eamonn said.

Cows are monitored and a calving camera is utilised, but for Eamonn, calving runs fairly smoothly with 135 calves so far.

“I have pulled one calf this year; he was backwards. Even the twins calved themselves.”

All births are dairy births. Eamonn uses 100% dairy AI and has no beef stock bull.

“We keep calf rearing as simple as we can; cold milk most of the time with a bottle and teat in the first one hour. Whole milk is fed as it’s just easier. It is more expensive, but I don’t have to mix. Plus, in the beginning, there is lots of waste milk anyway. 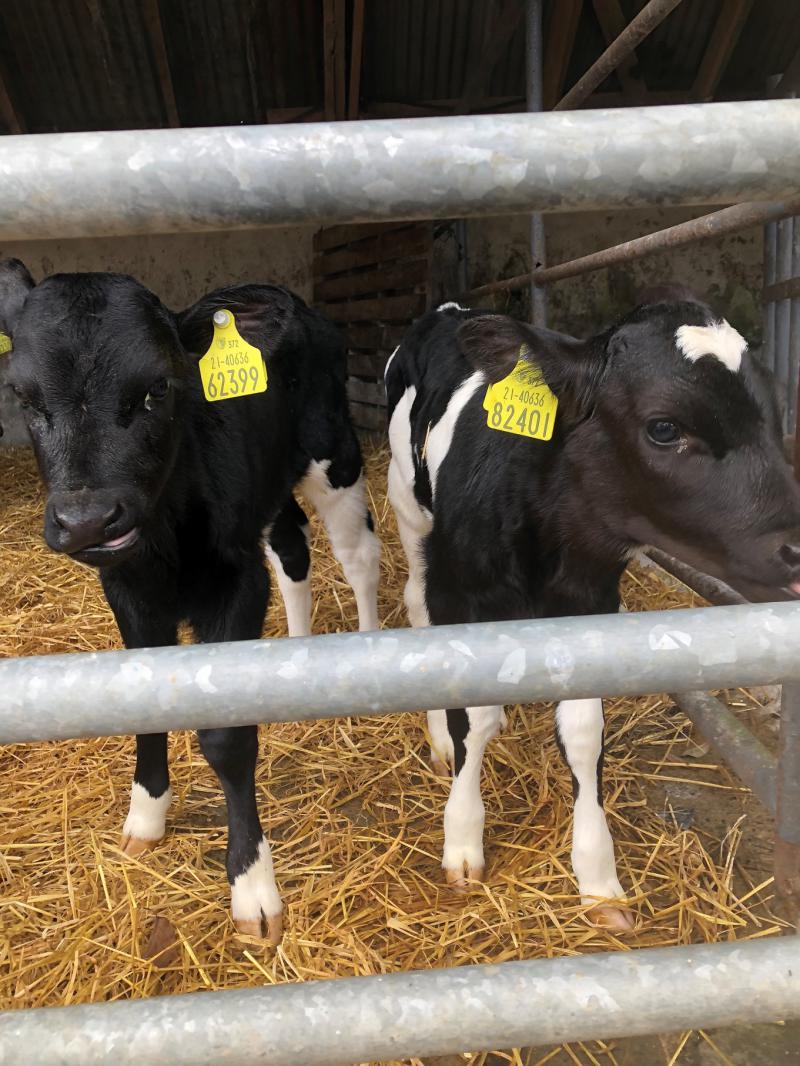 Two BJC daughters; one off a YGD dam and the other off a DSU dam

Calves go to ‘Bishopswoods’ at a few weeks old and “are fed milk once-a-day (OAD), with access to the field and a shed.

“They get a kilogram of Calf Starter Mix from Daltons (Kilkenny) once weaned until June. Then, they don’t get anything but grass. However, some of them do get silage. After that, they basically stay there until I sell them.”

Eamonn sells his excess heifers in-calf. This year, he has 89 maiden heifers; they will be AIed to sexed semen and conventional AI for six weeks and then a home-reared stock bull runs for three weeks.

The first 25-30 scanned to calve in the first two weeks of February are kept, calving down to sexed semen (usually the first 60 serves to heifers are sexed straws) and the rest are sold.

Heat detection on heifers is carried out by four vasectomised bulls. They’re usually the last four bull calves born (with them progressing to run with the cows after six weeks). In August all the bulls go.

In the past, Eamonn has tried tail paint and scratch cards with heifers, but he finds the vasectomised bulls with chin balls excellent. This helps further compact calving and allows a high percentage of heifers to be born right at the start of the season.

Eamonn gets great satisfaction from hearing how well heifers he has sold have performed in other farmer’s herds.

Silage quality is a big part of what Eamonn does with most silage in bale form. The cows get a basic diet of grass, silage and meal (occasionally contracted zero-grazed grass if required), so silage quality is really important. 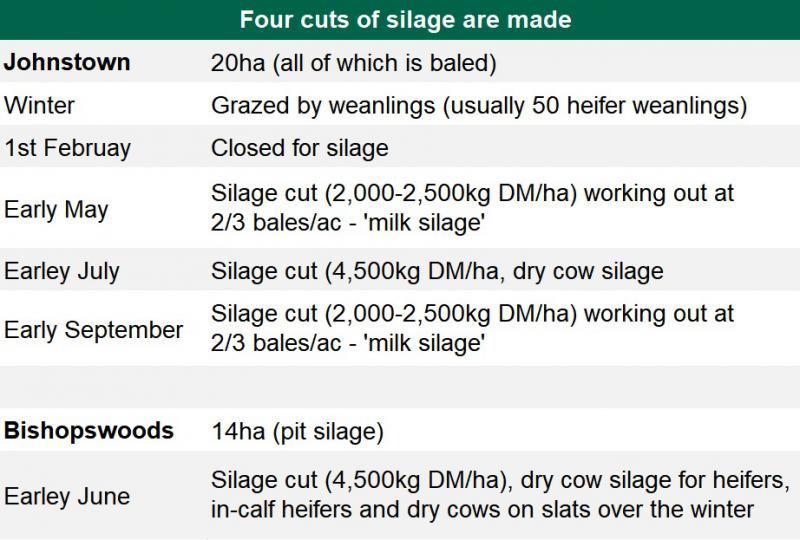 Bales are stored separately with the ‘milk silage’ a key part of the system. On average, they are 80% DMD plus, 15% protein and 0.94 UFL. This way of doing things is working for Eamonn.

“We’ve found that cow intake increases with these bales and yields are easily maintained,” he added.

Speaking on the future of his herd, Eamonn wants to stay at current numbers while “aiming to improve the herd, in terms of efficiencies and output”.

Having farmed in Tubberboe since 1985, Eamonn has a huge bank of experience, with a good chunk of machinery work outsourced.

There are only three cattle groups for most of the year and other labour reduction actions in place, such as the BattLatch which is saving a huge amount of time.

Eamonn is operating a highly-efficient low-cost system. He does feed what the average farmer is feeding in terms of meal at 800-900kg, but that’s with a stocking rate of 4.0LU/ha on the milking platform and producing a massive 2,000kg of milk solids/ha.

As Eamonn says: “The milking platform is now really humming.”

The above piece recently featured on Agriland.